New Center Of Gastronomy And Wine To Open In Burgundy 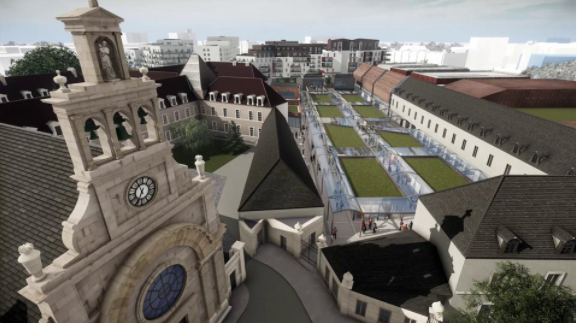 Burgundy, a mecca for culinary travelers, is known not only for its exceptional foods and wines but also for its medieval architecture, rich history and culture. Once an administrative region of its own, Burgundy now comprises the eastern half of the Bourgogne-Franche-Comte region of France.

The long-awaited May 6, 2022 opening of the newest “International City of Gastronomy and Wine” (Cité Internationale de La Gastronomie et du Vin) in Dijon offers one more compelling reason to visit this spectacular destination.

In the works for more than a decade, the project is part of the Network of Gastronomic Cities in France, created to showcase the country’s rich gastronomic heritage. The site in Dijon (the capital of Burgundy) joins three others that were created in Paris, Tours, and Lyon.

Ironically, the four centers are ‘tangible’ outgrowths of the “gastronomic meal of the French” that was added to the UNESCO Intangible Cultural Heritage List in 2010. This designation recognizes how the pairing of the right dishes with the right wines strengthens social ties.

Located in the heart of Dijon—a city already famous among foodies for its mustards, Michelin-starred restaurants, and wonderful farmers market (Les Halles)—the center will occupy a 16-acre site (about half of that devoted to protected woodlands). The land was once home to the city’s 800-year-old University Hospital.

Among the highlights of the ambitious project are:

Of course, in this unique terroir, wines take center stage. Burgundy is famous for both its reds and whites, which many experts consider “the best money can buy.”

The center in Dijon will have a Cave de la Cité wine cellar with 3,000 reference wines (some 250 will be available by the glass) spread over three floors, as well as a wine school (École des Vins de Bourgogne) run by the Bureau Interprofessionnel des Vins de Bourgogne.

Also notable is its proximity to the “Route des Grands Crus'' (the wine route from Dijon to Santenay) which leads visitors to vineyards that produce some of the world’s most prestigious Burgundy wines. (The Dijon Tourism Office website lists a variety of wine experiences that can be booked online, often with English-speaking guides).

Whether visitors arrive on bicycles, buses or by car, they can follow the brown and white signs with grape clusters that mark the Burgundy wine trail. Less than one-half hour away from Dijon, they’ll reach Beaune.

One of that city’s most remarkable monuments is the Hospices de Beaune, a charitable foundation for the poor founded in 1443. Every November, it is the site of a festive wine auction to benefit the heritage and medical structures of the Hospice.

One the road, wine lovers will discover dozens of charming wine villages, breathtaking vineyards, and wine grower’s cellars for tours and tastings. As just one example, private tours with a guided tasting of eight outstanding Burgundy wines can be booked (in advance) at the impressive estate of Bouchard Père et Fils or guests can visit their wine cellar that features a digital wine tour.

One of the oldest and most important wine merchant houses in the region, Bouchard Père et Fils was established in the Côte d’ Or in 1731.

This exceptional estate now includes 450 vineyards, including 183 acres in premier cru appellations and 30 in grand cru. Anchoring the grounds is Château de Beaune, a former royal fortress built in the 15th century by King Louis XI, a listed historical monument since 1937.

When Cité Internationale opens its doors on May 6th, the majority of the project will be in operation (with the exception of the hotel).

“Dijon has embarked on a truly far-reaching project, which is unquestionably the most complex and innovative project I have ever been asked to lead,” said François Rebsamen, mayor of Dijon in a press release announcing the opening.

“Above and beyond the Cité Internationale’s evident benefits for tourism, we are keen to ensure it is seamlessly integrated into the day-to-day lives of our city and its residents. By rehabilitating a site in the heart of the city that may otherwise have remained derelict, Dijon has begun writing a new page in its history with a project that embraces every aspect of city life, from urban development, heritage and culture to tourism, gastronomy, and wine,” he added.