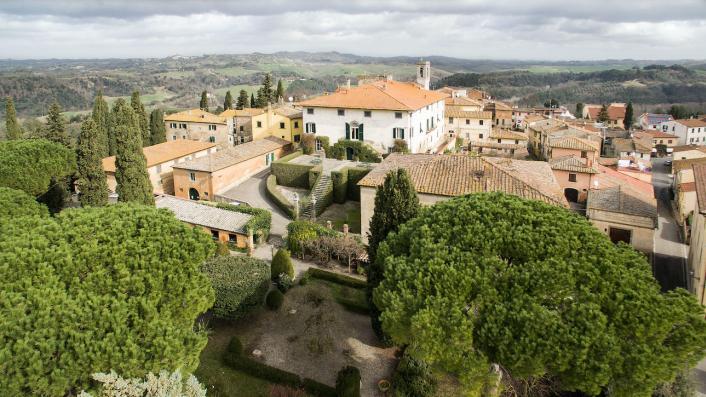 A great Sangiovese that deserves higher status and, probably, a higher price.

Over the summer I was sent the latest releases from Tenuta di Ghizzano, a family estate based round a hilltop village near Pisa, which has the most beautiful late-Renaissance-inspired garden, and four farmhouses for rent. Their top wine is called Nambrot, ‘after the founder of the Venerosi family, whose name was Nambrot and who lived in 830’. Pretty impressive lineage! It’s a bordeaux blend based on Merlot that retails for around £30.

It’s fine, but it’s not – do I hear Walter whispering in my ear? – particularly Italian, let alone Tuscan.

There’s also an easy Sangiovese-based red, Il Ghizzano, that sells for about £10 and which you would happily have on your table any night of the week.

But the wine that really hits the spot, in my view, is Veneroso, whose average price is closer to £20, and, if I had anything to do with it, I would make this my top wine instead of Nambrot because it is so quintessentially Sangiovese and of the place. It’s clearly raised in a warmer locale than most estates in the Chianti Classico hills that are further inland and much higher. I wrote about the 2016, that it has the texture of a luxurious Napa Cabernet (and I’m sure I speak for every wine lover when I say how deeply concerned I am about the wildfires that have been tearing through that blessed valley). But it is still overridingly an expression of Tuscany, with the frank, well-balanced character of a well-raised organic wine. It does have 25% Cabernet Sauvignon grapes in the blend but they play a distinctly minor role.

The Cabernet is a little more perceptible in the 2015, even if more in terms of structure than flavour, but the 2015 is a lovely wine too. Made in a hot year, it was the thirtieth vintage of Veneroso, and the Venerosi family commented, 'This is the historical and most representative wine of the estate. It was first produced in 1985 and since then its elegant, ripe fruit and mineral content has interpreted the characteristics of the soil where it is born. Made mainly from Sangiovese with a small percentage of Cabernet Sauvignon, it has become a point of reference for the wine-growing area where it originates.’ Bravo! I ended my tasting note, ‘A lovely goblet of Tuscany with real refinement but no skinniness.’

This is not a ridiculously alcoholic wine – both of these vintages are 13.5%. If you look at our tasting notes on different vintages, you will see that the scores are consistently high but have continued to rise. I gave the 2015 17/20 and the 2016 a wild 17.5/20. They really are extremely good value – for now. So long as the Venerosi family don’t follow my advice and elevate it to the top of their price range.

The wine is sourced from three vineyards, all at 180 m (590 ft) elevation: south-facing Torricella, south-west-facing Santa Maddalena, and south-west-facing Chiesina. Vine density is 4,500 to 6,300 vines per hectare. Grapes are hand-picked and sorted, and foot-trodden. Ambient-yeast fermentation in open 3,000-litre wooden vats is followed by ageing in 500-litre casks for 16 months. Annual production averages 20,000 to 25,000 bottles.

The 2015 is widely distributed in Italy, the US, as well as Germany, Switzerland, the Netherlands, France and Belgium. And in the UK it is available from Master of Malt and The Whisky Exchange, both of them selling it for under £25 – a snip for a subtle, pleasing wine that should drink well throughout this decade. For the moment, it looks as though the 2016 has reached only Italy and Switzerland but do look out for it.