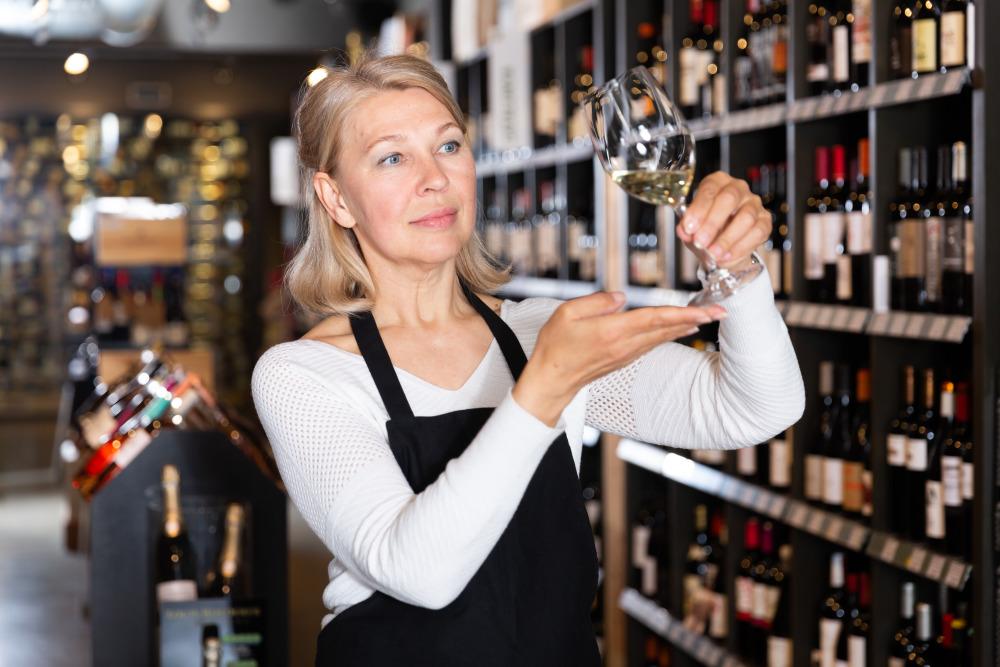 Is there a wine glass ceiling? Absolutely.

It's pleasantly surprising when you encounter a female winemaker behind a bottle while shopping for tonight's dinner, but it's still shockingly infrequent: there just aren't as many women winemakers.

The good news? The women that are crafting your favorite wines are truly trailblazers in the field, leading innovation from Sonoma County to New York, New Zealand, and beyond. They are front and center, making vocal changes in the industry, be it how they approach sustainability, redefine their audience, or push the limits of what winemaking can be.

While the beverage industry is full of girl power in other leadership positions—as proprietors, CEOs, marketers, publicists, and critics—the number of women actually making the wine lags far behind men. A 2020 study by Santa Clara University found that just 14 percent of California's more than 4,200 wineries have a female winemaker. The number is thought to be similar across Europe, if not less in countries like Spain and Portugal. It's traditional in much of Europe for patriarchs to pass along the family business to a male heir, even if that means it's the son-in-law, not the daughter. The only place that slightly bucks this trend is Chile, where women aren't just faces in the tasting room but are running 1/3rd of the countries wineries and producing incredible wines.

At the same time, studies have pointed toward women being better smellers and tasters than men, more accurately identifying and describing aromas. Women also account for 42% of graduates, on average, from the UC Davis Viticulture and enology program, one of the best in the world. It's exciting to imagine all the ways women will change the wine landscape.

As the industry evolves, more and more women are taking the helm in the winery, and their work is pushing winemaking forward with thoughtful perspectives on the production of red, white, and sparkling wines. To cheer on a few ourselves, here are six female winemakers rethinking what it means to be a modern winemaker today.

South Africa has no easy relationship with race, so when Ntsiki Biyela became the country's first Black female winemaker in 2009 and the first Black winery owner in 2016, it was truly a big deal. Five years later, she is still rocking it with her winery, Aslina, named for her beloved grandmother.

Her road was paved with enough hurdles for an Olympian. When Biyela graduated high school, she applied to grant programs to attend university. The only one offered to her was to study viticulture and oenology at Stellenbosch University. She had never tasted wine.

She quickly fell in love with winemaking while simultaneously noticing an unsettling disparity in South Africa's industry: white winemakers didn't market wines to Black South Africans because they assumed they didn't drink wine. That, Biyela decided, was her opportunity.

She took her first winemaker role at Stellekaya, where she not only excelled at producing award-winning wines but fundamentally changed the language used to describe her wines. Instead of relying on European-derived flavor descriptors, she opted instead for references to local food and drink from her native land—and saw new consumers flock.

At Aslina, her wines stand alone as stellar examples of South Africa's terroir, with varietal wines like Sauvignon Blanc and Chardonnay for the whites and Cabernet Sauvignon and Cabernet Franc for the reds. She could have easily felt satisfied with developing a new market base of drinkers at home with her self-funded winery. But instead, she took her product and her personality internationally.

South Africa has struggled to find consumers since the mid-1990s, facing the stigma that these "new world" wines couldn't hold up to those from Europe and California. With her accolades and star power as a groundbreaking female winemaker, she quickly became a voice in changing consumers' perceptions about South African wine, not only on a technical level but a social one as well. She rallied support the world over as a major face of South Africa's wine industry and remains one of the more recognizable female winemakers in the world.

In winemaking, there is the idea of terroir, a French concept that posits that the unique environmental conditions, including the soil and climate, in which a wine grape is grown affect the resulting wine in only a way that place could. One definition for terroir is "somewhereness." No two terroirs are the same.

Many winemakers take this to mean their entire vineyard site or even the overarching region in which they are located, such as how Cabernet Sauvignon will have a different expression in Napa Valley than it does on the Left Bank of Bordeaux. But then, there are winemakers, like California's Theresa Heredia, who take it to another level.

Heredia is the winemaker behind Sonoma County's famed Gary Farrell Winery. Set in the Russian River Valley, known for its cool, Northern California coastal climate, Gary Farrell offers a lineup of small-lot, single-vineyard Pinot Noirs from specific sites in the region. That's all the approach of Heredia, who will talk your ear off about precise blocks in the vineyard and why those grapes show separate characteristics from the one a few feet away. It's terroir down to the inch, not the mile.

When you taste through the full lineup of wines, you really notice how one Pinot Noir differs from the next—it's no small feat to create seven or more distinct Pinot Noirs each vintage. (She also makes Chardonnay!) You can only achieve something like that if you are truly a nerd about what you do. Heredia finds joy in the winery too, where she is constantly experimenting and pushing the boundaries of her winemaking techniques from harvest to fermentation and beyond. She often varies the winemaking process based on each site's fruit, not just the overarching brand's style. If there were any winemakers, male or female, who symbolized terroir, it's Heredia.

When Australia's renowned Penfolds Winery had the crazy idea to make a wine with grapes from two hemispheres—California's dominant Cabernet Sauvignon growing regions and its own Barossa Valley known for Shiraz—winemaker Steph Dutton was surely involved. One of the cult winery's senior winemakers, she's in charge of making a handful of the top red wines in the portfolio and tending to the grapes of the Nuriootpa property in the Barossa Valley.

Her team respects her for focus on innovation, always up the latest technology to refine what they do. To her, quality is key, even if it means tweaking something as small as 1%. That's what led her to the winery's Wine of the World project: How do you create a new style of wine with grapes from two continents while staying true to the pillars of the Penfolds brand? Nothing like it had ever been done before.

Along with two other Penfolds winemakers, she traveled to California for the 2018 harvest to hand-select Cabernet Sauvignon grapes from Paso Robles and Napa Valley to blend with Shiraz grapes from their top vineyards in Australia for the first vintage. The inaugural cuvée of four wines just launched in March in the U.S., defining what it means to be a multi-regional winemaker and creating a new premium wine product for the international market.

There aren't many places in France where a young woman can bootstrap her own winery, but it turns out Beaujolais is one of them.

Godard is an all-in-one vineyard manager, farmer, and winemaker who runs the show at her namesake domaine in Haut Morgon, France, one of the premier areas of the Beaujolais region. Born in South Korea and raised in Paris, she went to winemaking school at Oregon State University before returning to France to work in the industry. On a fateful trip with friends, she fell for the Beaujolais region, known for its iconic expressions of Gamay. She began looking for property and, in 2013, purchased her first five hectares of vineyard.

She wasn't lucky; she was savvy. Those five hectares were spread across three of the best portions of the Beaujolais cru, Morgon: Côte du Py, Corcelette, and Grand Cras. It's here where the heralded "Gang of Four"—Jean-Paul Thevenet, Marcel Lapierre, Jean Foillard, and Guy Breton—natural wine proponents put Beaujolais on the map. Being associated with the movement was one thing; being the woman doing it was entirely another.

As the new player, she puts her own philosophy to work, transitioning her vineyards to biodynamic farming techniques and varying the winery's traditional approach. Her structured, deep reds exemplify the iconic characteristics of Morgon and her other vineyard in Moulin-a-Vent, but one that consumers don't always call to mind when they hear the term Beaujolais. Her wines are the antithesis of the fruity, unaged Beaujolais Nouveau that hits store shelves just before Thanksgiving; instead, they are enrapturing reds that are snagging the hearts of sommeliers and wine drinkers everywhere.

You'd be hard-pressed to find a wine enthusiast who doesn't love Champagne, so that may be why the French sparkling wine region is booming with female winemakers. The latest to take over a major house? Alice Tétienne, who was just appointed the cellar master of Henriot this year.

A native of Champagne, Tetienne grew up running through the vineyards and dreaming of working in the industry. After gathering a slew of degrees from top oenological schools, Tétienne returned to Champagne to craft beautiful expressions of sparkling wine. She worked with Nicolas Feuillatte and Maison Krug before landing the top oenological spot at Henroit.

Her appointment is not only significant for her as a female winemaker but also for the house. She's the first woman to lead the winemaking team and one of the youngest too. As one of Champagne's smaller producers, Henroit demands that a winemaker wear a few more hats than they would at a larger organization. That's what really inspired the team to hire Tétienne: she's not afraid to get her hands dirty. In her past roles, she's done everything from manage relationships with grape growers to marketing the Champagne as an elegant spokeswoman. Leave it to the female winemaker to be able to do it all with grace. That's definitely worth popping a bottle.

The only thing better than a female winemaker is three. That's the story of Elena Walch, a household name when it comes to Italy's Aldo-Adige region, and her two daughters, Karoline and Julia, who jointly run Elena Walch.

Elena Walch is legendary in the region, heralded for her work to modernize viticultural and oenological techniques three decades years ago. Originally an architect, she married into the prominent Walch family, which, of course, meant wine all day, every day. But Walch didn't come from the wine world, which meant her approach arrived unencumbered by preconceptions. To improve the quality of the region's top grapes—Pinot Grigio, Gewurztraminer, Müller Thurgau, Pinot Nero, and Lagrein, among others—she instituted high-density planting, reconfigured the vine training systems in the vineyards, and employed French oak barriques. It was considered sensational at the time, but now it's standard practice.

She's further innovating by training her two daughters to follow in her footsteps and take the now robust portfolio to the next level. Karoline and Julia are charged with overseeing six different collections of wine, ranging from everyday drinking to grand cuvees that age 20-plus years. Her daughters both attended school outside of Italy as well as spent time studying wine in places like Bordeaux and Australia. But now that they are back in northern Italy, the beverage world is watching how they're poised to be the next generation of Italian wine.

The wine business is a constantly changing environment that sees more and more great wine coming from female vintners every year. There are driven women like Cathy Corison (head winemaker at Corison in Napa Valley) and Gina Gallo (who went from being an assistant winemaker to chief winemaker and operator of the world's largest privately owned wine company) who are opening doors for young female winemakers from Burgundy to Northern California and beyond. We hope to see women topping "winemaker of the year "lists from here on out.