Fall for a Little Fizz

After a summer where most of us broiled in relentless heat, we need to stop for a moment and rejoice that crisp mornings, pumpkin-spiced everything and sweater weather are finally here! And what better way to celebrate the turning of the seasons than by clinking a glass of bubbly with a favorite friend or two? With distinctive styles and flavor profiles, the three labels below are all worthy of consideration any time you want to pop a cork.

If one word could be used to describe the family of Korbel champagnes, it would be versatility. The eight champagne labels that Korbel sells nationally allow almost endless combinations when paired with food. “Brut pairs well with lighter chicken and fish dishes, Brut Rosé is fantastic with fruit-based desserts and Blanc de Noirs is amazing with turkey dinner,” says Director of Winemaking Paul Ahvenainen. 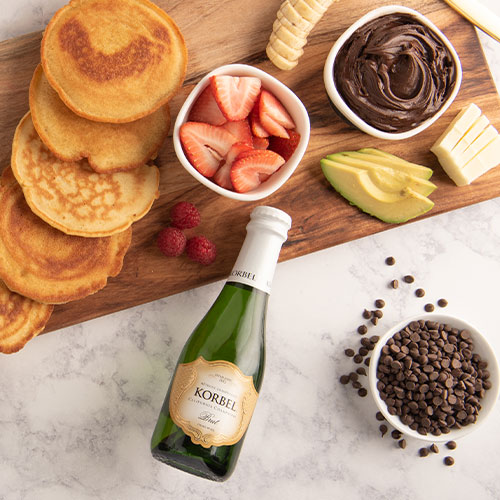 But Korbel goes way beyond food pairings. The company’s philosophy is to make champagne accessible to anyone and everyone. With that in mind, their smaller 187ml individual bottles have become extremely popular and a go-to brunch staple. “Consumers have been looking for alternative packaging and sizes, like Korbel’s 187ml Brut and Brut Rosé. These have been popular in allowing consumers an option to have one (or two) drinks without opening the whole bottle,” says President, Chairman and Owner Gary Heck.

Korbel is all about supporting events that bring people together to share life, laughter and love. Besides being the Official Sponsor of Brunch, they have partnered with NBC Sports for more than 25 years. “Between the Olympics, ADT Golf Skills Challenge, FIS Alpine Ski World Cup, USA Curling and the American Century Celebrity Golf Championship, we have positioned ourselves as a premier celebratory product alongside our partner,” Heck says. In addition to being the “official bubbly” of the Boston Red Sox and the PNC Championship that will bring the greatest golfers together to play with their sons this December, Korbel also signed on this past year with Los Angeles Football Club (LAFC) as their official champagne.

Beyond supporting brunch and sporting events, Heck and his team at Korbel realize that the winemaking industry also must support the environment. They are the first U.S. producer to release a California Brut champagne made with organically grown grapes. “Wine made from organically grown grapes is currently a small but growing segment. Sparkling wine made from organic grapes is an even smaller segment,” says Heck. “For Korbel, this is really about our sustainability goals. We have learned a lot about our own processes and how to make them better.”

Unmistakable. Elegant. Timeless. And that’s before you even open the bottle. 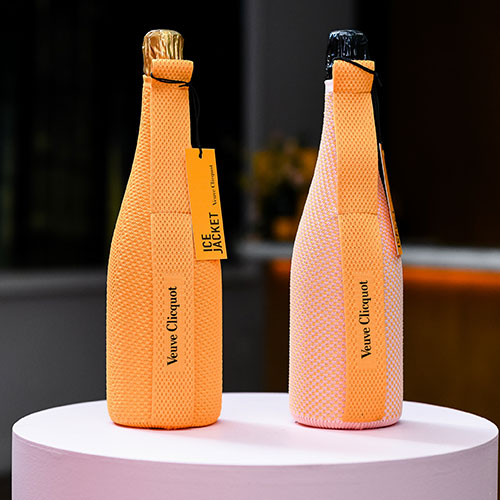 While Veuve Clicquot’s personality is immediately noticed by the champagne’s iconic yellow label, it takes just one sip to realize the bubbly character displayed by the bottle has been perfectly balanced with a long history of impeccable credentials blended into every cuvée.

Balance can be seen everywhere in the House of Veuve Clicquot. Winemakers blend 30% to 45% of reserve wines with grapes from as many as 50 to 60 different crus (or vineyards) in France. Each step of the winemaking process is meticulously conducted to ensure that 100% of all Veuve Clicquot vineyards practice sustainable viticulture. Beyond the innovative techniques the company is using to remain a fixture in Champagne, every bottle produced celebrates the iconic Madame Clicquot.

Known as the “Grande Dame of Champagne,” Madame Clicquot assumed the reigns of the company after her husband’s untimely death in 1805. She combined her daring personality with her exceptional intelligence to improve the quality of her wines. She devised the table de remuage, or riddling table, to clarify champagne and created the very first blend of rosé champagne. Because of her dogged pursuits to never stop pushing the envelope when it came to innovation, the brand has become known as exceptional not only for its quality but also for designing unique packaging that gives champagne enthusiasts memorable ways to enjoy their champagne.

In celebration of the brand’s 250th anniversary this year, Veuve Clicquot is offering a quartet of their most emblematic and beloved bottle carriers from years past called the ICONS Collection. The brand has been toasting to this momentous milestone all year long, first with their Solaire campaign, which launched this spring, and then with more offerings this fall. 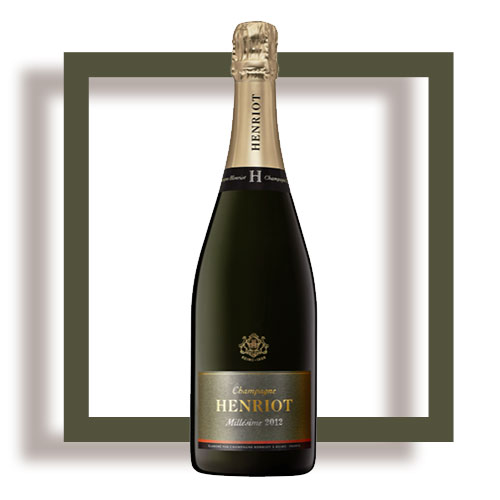 Strong women are also responsible for the long tradition of winemaking at Champagne Henriot. Founded in 1808, Apolline Henriot’s mission was to create a Champagne that captured the complexity of her family’s land while reflecting her love of the Champagne region. Apolline began with three vineyards in the Montagne de Reims (Pinot Noir Grands Crus). In 1880, her efforts were followed by Marie Marguet, who married Apolline’s grandson and added three vineyards in the Côte des Blancs (Chardonnay Grands Crus). “These mark the style of the house focused on Premiers & Grands Crus and the balance of Pinot Noir and Chardonnay,” says Amelie Derrieux-Sable, director of marketing at Maisons & Domaines Henriot America. “Our Prestige Cuvee, now called Hemera and produced only in the best years since late 1890, pays tribute to these six founding vineyards and crus.”

Today, Champagne Henriot is one of the few remaining family-owned Champagne houses. Staying independent has allowed current cellar master Alice Tétienne to ensure that more than 200 years of heritage continues. “It all starts in the Grand and Premier Crus vineyards,” says Tétienne, who was recognized as winemaker of the year in 2020 by the Trophées Champenois. “Thanks to our independent status, I can work closely with winegrowers to ensure grape quality and continue to craft the exceptional cuvées of the House.”

This year, Champagne Henriot has released its newest creation, Millésime 2012, as a way to pay tribute to Appoline’s unyielding belief that time is their ally and patience is their secret. What started as a troublesome year in terms of weather — episodes of frost, hail and heavy rain plagues the initial months of their region — eventually yielded, and favorable heat waves graced the region at harvest time. “During harvest, the heterogeneity of the grape profiles resulting from the weather conditions in 2012 made quite an impression,” says Tétienne. “When we made the blend for this new creation, our desire was to capture the diversity of the aromatic profiles while achieving harmonious balance. Millésime 2012 is thus a wine of contrasted harmony.”