This year, April 22, 2020, marked the 50th anniversary of Earth Day, an annual celebration that addresses environmental pollution. Founded in the United States, Earth Day served as a catalyst for the creation of federal environmental agencies and laws like the E.P.A. (Environmental Protection Agency), the Clean Air Act and the Clean Water Act. Since the passage of these laws, air and water quality has significantly improved, yet we still have a long way to go. The E.P.A. says that millions of Americans live in counties with unhealthy levels of pollution.

And the rest of the world isn’t faring any better. According to The World Health Organization, more people die from air pollution than from AIDS, malaria, and tuberculosis combined (The New York Times).

Since its founding, Earth Day has grown into a global phenomenon and is now celebrated by millions of people worldwide. The theme for 2020 is climate change, including global warming, the ongoing warming of the planet caused, in part, by the burning of fossil fuels like gas, oil, and coal that release carbon dioxide and other pollutants into the environment.

Earth Day celebrations typically bring communities together for political action and civic participation: rallies, conferences, service projects, and outdoor activities. This year, due to the ongoing Covid-19 pandemic, people weren’t able to take to the streets. Instead, the celebration was held online in webinars and zoom conferences where a wide range of industries, from engineering to sports to winemaking, and more, promoted the protection of our earth.

Agricultural practices have been around for thousands of years without incident however, the 20th century’s introduction of industrial and chemical farming methods have contributed greatly to disturbances in the earth’s delicate ecosystem. And wine production is no exception. The use of chemical fertilizers and pesticides, water and energy during vinification creates greenhouse gas emissions that contribute to global warming.

The practice of winemaking itself is threatened by the recent trend of erratic weather conditions brought about by climate changes: extreme hailstorms, early spring frosts, record-breaking rain, scorching heat waves. Abnormal weather has a large impact on the quantity, as well as the quality, of the fruit. With the trend of rising temperatures, winemaking regions are dealing with grapes that have more sugar and less acidity, resulting in wines that are too alcoholic and have lost their freshness.

With the threat of climate change on the rise, sustainable and organic viticulture have become hot topics in the wine world. Wineries from Napa to France to Australia are making changes that will help reduce their carbon footprint and preserve natural resources for future generations.

Doing Their Part In Chablis

Chablis is an historic wine-producing town and region in northern Burgundy. Chablis is also the name of the wine that comes from this region. Made solely from the Chardonnay grape, Chablis wines are revered for their crisp acidity and flinty minerality, characteristics gained primarily from its cool climate and Jurassic-era chalky limestone Kimmeridgian soils.

As a Chablis-loving wine writer, I jumped on an invitation to join an Earth Day webinar with Didier Séguier, Cellar Master at William Fèvre. For the past two decades, this iconic winery has been a pioneer of sustainable winemaking in Chablis. 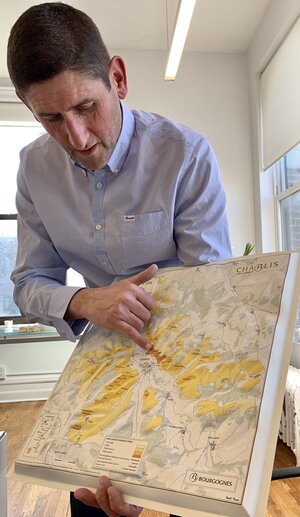 17th century, but it wasn’t until 1959 that William Fèvre founded his own winery with just 17 acres (7 hectares) of vines.  As a visionary, Fèvre understood the potential of Chablis, then a small, unknown wine region. Fèvre wisely purchased the best Premier and Grand Cru plots, turning his estate into one of the largest and most prestigious in the region. When he retired in 1998, Fèvre sold the winery to the Henriot family of Champagne. The Henriots appointed Didier Séguier, then with Bouchard Père et Fils (another Henriot property), to be the chief winemaker for William Fèvre. In 2018 Séguier was awarded White Winemaker of the Year by the prestigious International Wine Challenge in London.

During the past 22 years, Séguier has implemented several environmentally friendly measures to yield high quality grapes. In 2015 William Fèvre was the first winery in Burgundy to be designated as HVE3 (“High Environmental Value”), the highest level of environmental certification for farms and vineyards in France.

“Our philosophy is to respect and express the true terroir of Chablis and the most important thing is the grapes,” he says. “Eighty percent of my job is in the vineyards, not the cellar.” Seguier considers winemaking to be like cooking. “If you don’t have good products, you can’t make a good dish and if you don’t have good grapes, you can’t make a good wine,” he says.

In addition to being awarded HVE3 certification, William Fèvre is one of the first wineries in Chablis to have implemented organic practices. In 2000, the winery began converting its vineyards — a slow transition done plot by plot — and by 2006, two-thirds had been converted. And although the winery is not yet certified organic, Séguier says that chemical products are not used in any of the vineyards or in the cellar.

Continuing along this vein, in 2010, the winery began using biodynamic practices, a philosophy of farming that is very similar to organics but with the inclusion of holistic and ethical concepts that add vitality to the vines and soil. “Today all our vineyards on the right bank of the Serein River — our most important Grand and Premier Cru vineyards — are biodynamic,” says Séguier. And as of this year, William Fèvre’s Premier Cru organic vineyards on the left bank of the river have been converted to biodynamics as well.

Biodiversity is an important component of organic and biodynamic viticulture and contributes to the well-being of the earth. Having an abundance of different organisms helps to create unity and keep balance within all of our ecosystems — from wildlands and urban parks, to wetlands and farms and vineyards.

As a proponent of biodiversity, William Fèvre continues to increase diversity within the vineyards. Vegetation covers like hedges, trees, and grasses, as well as farm animals like goats, sheep, lambs, chickens, and geese have been added to the vineyards. The addition of bee hives, bat shelters and nesting boxes for the chickens add to the diversity. Honey and eggs (given to the employees to take home) are now produced at the winery, and the bats protect the vines from insects. “It’s a farm,” says Séguier with a big smile, and he relays that he grew up in a farming family and how his grandmother had raised goats for cheese-making in the north of Cognac. 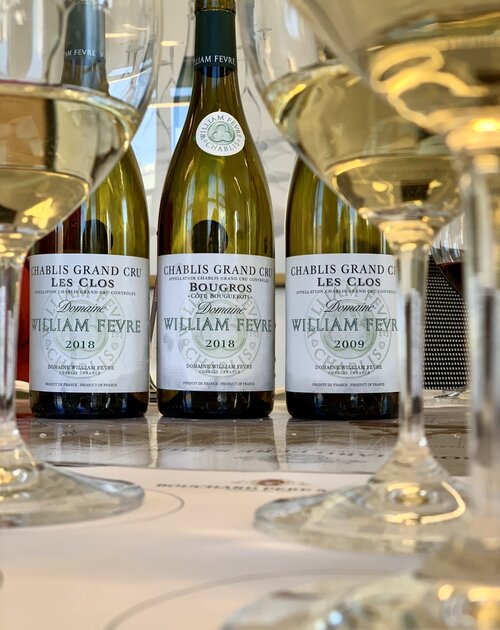 The reduction of fuel consumption is another way that William Fèvre combats the negative effects of climate change. In 2003, fuel-based frost control was eliminated at the winery, replaced by anti-frost covers, electric wires, candles, and frozen water (water from the Serein river is sprayed and frozen around green tissues, releasing heat that protects the vines).

Water management is also an important method for increasing energy efficiency and reducing greenhouse gas emissions. Séguier says that minimizing water usage during the winemaking process is one of his biggest challenges. Reduction measures include dry farming (no irrigation), the use of recycled water to clean bottles and equipment, and the recovery of rain water (from the roofs) to make the organic and biodynamic treatments. All of the winery’s annual water needs are covered by these methods.

On this Earth Day and all throughout the year, let’s raise a glass — of Chablis! — to wineries like William Fèvre that are working to save our planet. Under Séguier’s masterful leadership, William Fèvre is producing pure, fine-quality “terroir” wines that are a direct reflection of the healthy Kimmeridgian clay soils, clean air, and diverse ecosystem that they come from.