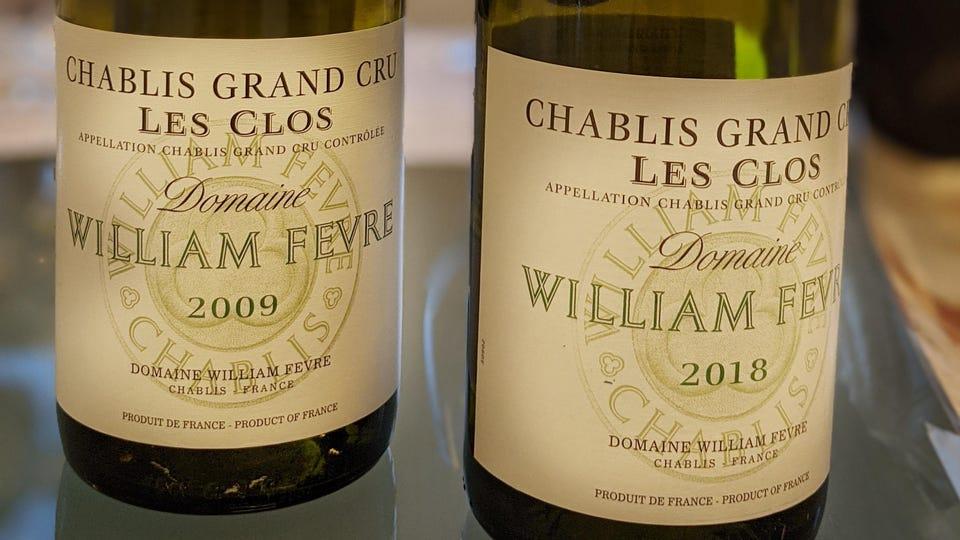 A storyteller who focuses on wine and the people who make it.

The largest owner of Grand Cru and Premier Cru vineyards in Chablis, Domaine William Fèvre, was recently able to convert all of their Grand Cru and Premier Cru vineyards to biodynamics as well as being organic. But according to long time cellar master Didier Séguier, they have been on the journey of integrating more holistic practices for 20 years, starting with eliminating herbicides in 2000 and moving to organic practices in 2006. Didier, who joined Domaine William Fèvre in 1998, described how he started with organics trusting his gut feeling, “It was uncommon 20 years ago but I had the intuition that limiting the use of chemicals was better for us, better for the land, for the vines and for consumers too.”

Didier Séguier was raised in the area of Blaye right outside Bordeaux where he knew at the age of 15 years old that he wanted to be a winemaker as he loved working in the vineyards. France has had a long tradition of calling those winemakers who give priority to their land a ‘vigneron’ and there is no one word in English that has the same meaning, and hence, why sometimes winemakers from other countries will use the term to express this main focus. In 1992, he joined the winemaking team at Bouchard Père & Fils and was moved to Domaine William Fèvre six years later to lead the winemaking team once the Henriot family purchased the winery and the vineyards. William Fèvre had grown children but they didn’t want to take over the difficult work of growing grapes and making wine and so in his golden years he sold the property yet still kept in touch with the Henriot family and Didier up until his death last year. But it was always a relationship of respecting what William knew about each plot and honoring his legacy that still graces the label of the wines.

Joseph Henriot encouraged Didier to find a deeper expression of terroir and working in a sustainable manner, striving for more ecological balance that was first implemented in 1998 as well as advancements in the cellar that would allow for more clarity when it came to bottling each vineyard’s sense of place. Since organic practices were not as popular then as they are today, Didier talked about the difficulty of “fighting the weeds and starting from scratch” when they stopped using herbicides in 2000 as there wasn’t a lot of knowledge or assistance of how to go about it that was coupled by the tremendous amount of stress as there was no assurance that organic practices would work.

In 2006, when Didier decided to make the move to biodynamic practices by constantly working on a harmonious “ecosystem” and within the “lunar calendar,” he knew that the ideal vineyards to start a 100% conversion in 2010 would be the Grand Cru and some of the Premier Cru sites (initially 54 acres) as they had the ideal aspect and growing conditions for healthy fruit even during the toughest vintages; today they have converted all of the Premier as well as Grand Cru vineyards to biodynamic practices bringing their vineyard coverage to 79 acres.

Simply, Didier described organics as what one doesn’t use, such as chemical products, and biodynamics is what is given back to the land as well as finding the land’s natural rhyme. And when it comes to certification, Domaine William Fèvre was the first winery in Burgundy to receive the third level certification from the HVE (Haute Valeur Environnementale) which is the highest level of sustainability the French government can give. At this time Didier said they have not applied for an organic or biodynamic certification from Demeter as it gives them no ability to temporarily shift practices for a short period of time (despite keeping true to the organic and biodynamic principles during the majority of the growing season and most importantly several weeks leading up to harvest) which causes problems for an area plagued with disease, frost and hail; just recently Domaine William Fèvre lost 50% of their yields for 2017 and 2019. Actually they have not been able to make the sub-plot ‘Vaulorent’ section that is within the Fourchaume Premier Cru, which is separately bottled because it has more “Grand Cru qualities such as more structure and minerality”, for seven years because of lack of yields – happily 2018 will be released onto the U.S. market.

But Didier said that they feel the pressure for a Demeter certification in regards to sales as that has become the trend in recent times. He is less passionate about the idea of getting certified just for the idea of it instead of knowing the work they do year in and year out and seeing the results. Didier used one of his favorite sub-plots as an example to illustrate the differences in his wines since going biodynamic - he makes a Bougros Grand Cru and a separate bottling of this Grand Cru only sourced from the plot ‘Côte Bouguerots’ within the Bougros vineyard. ‘Côte Bouguerots’ or Didier’s “baby” as he calls it has a “higher minerality level” with “a true expression of Kimmeridgian soil” – the famous soil of Chablis. “One of the best expressions of Chablis” exclaimed Didier and in his opinion the biodynamic practices have highlighted those qualities and he had many other examples of other plots when it came to noting a difference.

How One Wants to be Remembered

It is important to improve and evolve with each generation like in recent times learning the importance of working with vineyards in a way that creates a symbiotic relationship between man and the earth, but it is just as important to realize what the previous generations were able to accomplish. Didier constantly pays homage to William Fèvre and the man’s genius of knowing how to pick the best sites when land was a lot cheaper in the late ‘50s and early ‘60s and William continued to be a great resource for them even after the winery changed hands from one French wine producing family to another. When it came to asking Didier what would be the most important thing that he would leave behind, he did not hesitate in saying, “To leave the land better for future generations” as well as enforcing how crucial it is to continue taking care of the land. In that moment, it became apparent that one day other vignerons will pay homage to him and that the best way to remember him is to respect the vineyards.

Most of the tasting focused on a preview tasting of the 2018 vintage yet there was a comparison at the end between a 2018 Grand Cru ‘Les Clos’ and a 2009. After losing 50% of their yields in 2017, as well as in the following 2019, Didier said it was nice to have a “normal yield” with warm weather, no frost, good flowering with a dry, hot summer and Didier harvested on the 3rd of September, much earlier than usual, in order to retain acidity and freshness. Many people did not know if the 2009 vintage would age well but Didier pointed out that the fruit disappearing increases the sense of terroir, minerality and acidity and it is a good benchmark of the future for the 2018s as the vintages are similar.

2018 William Fèvre, Chablis Premier Cru Montmains (Domaine): This Montmains Premier Cru vineyard is known for its upfront minerality, which it did express with a richer body than 2017 yet still had some zesty citrus notes and solid definition to the shape of the palate.

2018 William Fèvre, Chablis Premier Cru Montée de Tonnerre (Domaine): The oldest vines they have are in this plot, planted in 1936 – over 80 years old. More of a chalky quality to this wine with juicy nectarine and pretty floral notes on the finish.

2018 William Fèvre, Chablis Grand Cru Bougros ‘Côte Bouguerots’ (Domaine): These vineyards have a very steep slope with a gradient of more than 30%. Fierce minerality with a thrilling acidity with a long, elegant finish that kept lingering notes of seashells and citrus blossoms in one’s head; one would never guess that this came from a warm vintage.

2018 William Fèvre, Chablis Grand Cru Les Clos (Domaine): These vineyards have soil mixed with fossils and stones (lots of Kimmeridgian soil) with 31.5 inches of limestone as well as the majority of vines were planted by William Fèvre’s father in the 1940s. A bigger wine with more flesh and structure that had flavors of golden apples with freshly baked bread that was deliciously generous yet with plenty of vitality and stony minerality to give it Grand Cru bones.

2009 William Fèvre, Chablis Grand Cru Les Clos (Domaine): A complex nose with notes of chanterelles and dried chamomile that expanded on the palate with rich peach flavors that had a zingy yet creamy lemon curd finish.